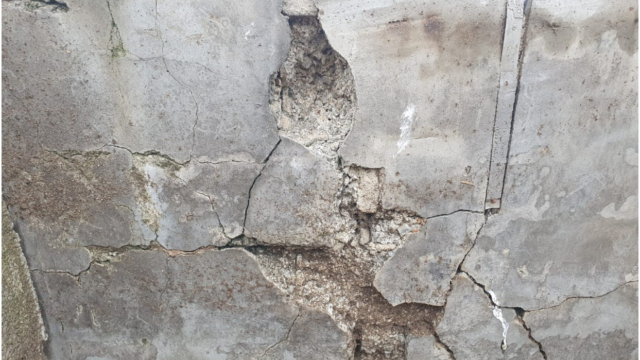 “My old service house for the sows – I had to knock it down because I was afraid of it,” said Donegal pig farmer, Jimmy Mooney, describing his reality of the ongoing mica nightmare in Donegal.

Thousands of homes, public buildings and “hundreds of farmers’” sheds and outbuildings have fallen foul to defective concrete blocks caused by muscovite mica, a naturally occurring mineral that deteriorates when exposed to moisture and oxygen.

In Donegal, it is estimated that up to 5,000 homes have been impacted but this figure could be more and it does not take into account the many other structures that were built with these defective blocks.

Several hundred houses in Mayo are also impacted by this and another mineral called pyrite, which causes similar destruction.

While homeowners – many of whom are farmers – are now calling for the €20m redress scheme to be amended to a 100% scheme (rather than 90%:10%), hundreds of farmers are watching sheds and other structures crumble on their farms.

These structures are not included in any redress scheme.

The number-one priority is people’s homes, Jimmy said, and that is the main reason he and his family, and thousands of others from the county, will stage a protest in Dublin next Tuesday.

At the same time, like him, hundreds of farmers have been footing repair and rebuild costs of their farm structures with no assistance, which he believes is also unjust.

Jimmy runs a 600-sow enterprise in Malin Head and has been in pig farming since the early 1990s. He has been developing and investing in his farm bit by bit ever since.

But, the discovery of mica in the blockwork of his piggery, which comprises several sheds, has been devastating.

“I first noticed strange cracks after the sheds were built – horizontal and vertical cracks would appear on the walls, then the plaster would come off the block. When the rain would get in, the block would start disintegrating.

“When this happens, the structure of the shed is no longer fit for purpose. The insulation in the cavity gets damaged, the fixtures and fittings – the drinkers, for example – won’t stay on the walls because the blocks aren’t strong enough to hold them.

“It is almost like the blocks melt. Some are affected quicker than others. The piggery is a very harsh environment, but it gives some idea of what is coming down the road for people’s houses as time passes,” Jimmy said.

Jimmy has rebuilt one shed already – demolishing more is on the cards, he said.

“I have six sheds substantially affected by mica. I have already rebuilt one shed that literally would not stay up. I was afraid that it would fall down.”

The safety of the four full-time (including himself) and three part-time staff on his pig farm is paramount – but the danger these structures pose is a constant worry, Jimmy said.

“The gable of that shed was 12ft high and I couldn’t trust it, I was afraid of it. We didn’t even need a digger to knock it down.

“Once we lifted the roof and timber off it, it would be safe to say that it just fell down.”

In addition to the high risk posed by these structurally unsounds sheds, there is also the matter of extremely high costs associated with repairing and rebuilding.

Jimmy has been carrying out repair works for years. He currently employs someone three days per week who carries out repair work on the farm, much of it on the mica-affected buildings.

When asked about the costs incurred, Jimmy said: “It is embarrassing.”

“Put it this way, the next buildings that I knock and rebuild will have to be built to different standards now and it will be between €3-400,000 at least, and that is not the end of it either.

“I am going to have to knock three sheds and I plan on replacing them with one shed, subject to planning.

“But the walls on those sheds are gone, and there is no point in me renovating them to the new standard when it will have to be knocked eventually.

“There is just a lot of work to be done.”

Donegal is united in a way that Jimmy has never seen prior to this – it is one positive that has come from such a negative situation.

“I’ve never seen Donegal as united before. So many people are impacted, either directly, or they know somebody who has been affected.

“I know one family – extended family members – and six houses in that family are impacted by mica.”

PROTEST
The Mica Action Group, comprised of homeowners whose homes were constructed with defective blocks will stage a protest outside the Convention Centre, where the Dáil is currently sitting, on June 15.

Jimmy said he would like to see someone held accountable for what has happened:

“I don’t know who is at fault here but I know that we [people in Donegal and Mayo] aren’t.

“We bought those blocks in good faith and there is a stamp at the top of the docket to show that these blocks were produced to certification. But clearly there was something wrong.”

People’s homes come first, he said, but added that nobody should be out of pocket because of what has happened.

The post ‘I had to knock it down because I was afraid of it’ – Mica impact on Donegal pig farm appeared first on Agriland.ie.